Doha, Qatar – December 8, 2022 – Visa (NYSE: V), the Official Payment Technology Partner of FIFA, today released spend data on Visa cards for all official FIFA World Cup™ venues from the start of tournament through group matches stage on December 2.  According to the data, consumer spending (by value) at Qatar 2022™ is close to exceeding total spending for the entire FIFA World Cup 2018™ (89%) and has already exceeded total spending at FIFA World Cup 2014™ (192%). The data also revealed that 88% of Visa payments at official Qatar 2022™ venues have been contactless.

“For Qatar 2022™, Visa enabled more payment terminals in official venues than ever before and are trialing some innovative new ways to pay around Qatar, so paying for things can be less cumbersome and fans can stay in the moment and focus on the beautiful game, “ said Dr. Saeeda Jaffar, Senior Vice President and Group Country Manager, Gulf Cooperation Council - Visa.

Between kick-off on November 20 to the final group stage match on December 2, 70% of all consumer spend by value at official FIFA World Cup™ venues was on internationally issued Visa cards with the United States (18%) leading, followed by Mexico (9%) and KSA (8%). 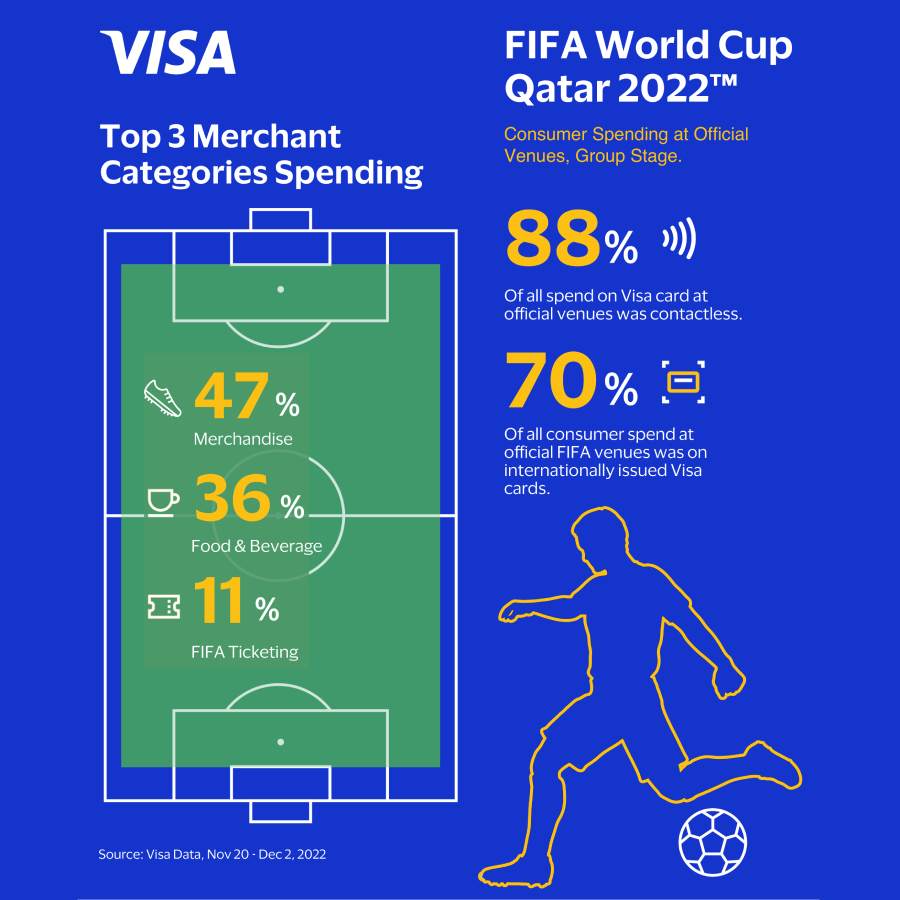 For the FIFA World Cup Qatar 2022™ Visa is the exclusive payment technology partner in all stadiums where payment cards are accepted. At the more than 5,300 contactless payment terminals at FIFA's official venues, fans can pay with Visa credit, debit or pre-loaded Visa gift cards available at any official Qatar 2022™ venue.

Visa (NYSE: V) is a world leader in digital payments, facilitating transactions between consumers, merchants, financial institutions and government entities across more than 200 countries and territories. Our mission is to connect the world through the most innovative, convenient, reliable and secure payments network, enabling individuals, businesses and economies to thrive. We believe that economies that include everyone everywhere, uplift everyone everywhere and see access as foundational to the future of money movement. Learn more at About Visa, visamiddleeast.com/blog and @Visamiddleeast.